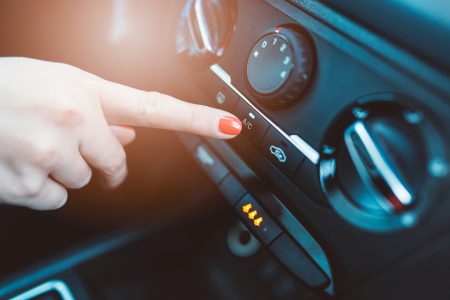 The air conditioning system in your vehicle is split into two halves, a high-pressure side, and a low-pressure side.  The high-pressure side starts at the compressor and ends at the expansion valve and the low-pressure side starts at the expansion valve and ends at the compressor again.  These two devices have similar, but opposite tasks of either increasing or decreasing the pressure.  The real question is, why would you want to increase the refrigerant pressure in your air conditioning system if you were going to allow it to drop back to a low pressure just a few moments later?

The reason for this seemingly pointless path for the refrigerant in your system is to take advantage of the cooling effect you get when allowing a high-pressure fluid to quickly decompress.  You may have experienced this when using a can of spray paint.  If you empty the can quickly you will notice the can becoming cold in your hand.  The expansion valve in your vehicle creates the same effect by allowing the refrigerant to decompress quickly.  This causes the refrigerant to be cooled down near 32 degrees in your car!  This cold refrigerant is then sent to the evaporator in your car where it can cool the air in your cabin.

Some leak stop products use tiny particulates to literally clog up leak spaces in your air conditioning system to help keep refrigerant contained.  These leak stop products can often clog your expansion valve as well rendering your system inoperable.  You can prove you’ve got a clogged expansion valve by measuring the pressures around your system and checking for an abnormally high pressure on the high-pressure side of the system along with no cooling effect.

For more information about Red Angel A/C Stop Leak & Conditioner, click on the banner below!

You can purchase Red Angel A/C Stop Leak & Conditioner at any of our partnering local auto parts stores like:

Stay in touch with new products, promotions, free stuff and more! Subscribe to our newsletter now!